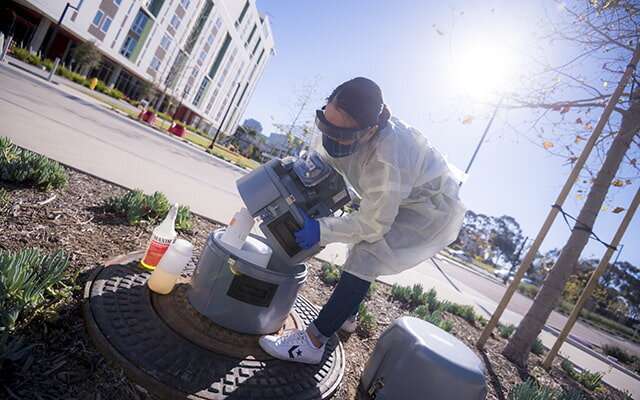 Auto-sampling robots at scores of sites on the UC San Diego campus collected wastewater samples, which were analyzed for levels of SARS-CoV-2 RNA by labs at UC San Diego, with further computational analysis conducted at Andersen’s lab at Scripps Research. Credit: Erik Jepsen/UCPA

Writing in the July 7, 2022 online issue of Nature, scientists and physicians at University of California San Diego and Scripps Research, with local and federal public health officials, describe how wastewater sequencing provided dramatic new insights into levels and variants of SARS-CoV-2 on campus and in the broader community—a key step to public health interventions in advance of COVID-19 case surges.

Importantly, the authors said the approach, deployed by UC San Diego as part of its Return to Learn efforts and then more broadly in the surrounding region, is a scalable, cheaper and faster way for communities and regions to detect the coronavirus and take appropriate actions.

“The coronavirus will continue to spread and evolve, which makes it imperative for public health that we detect new variants early enough to mitigate consequences,” said co-senior study author Rob Knight, Ph.D., professor and director of the Center for Microbiome Innovation at UC San Diego.

“Before wastewater sequencing, the only way to do this was through clinical testing, which is not feasible at large scale, especially in areas with limited resources, public participation or the capacity to do sufficient testing and sequencing. We’ve shown that wastewater sequencing can successfully track regional infection dynamics with fewer limitations and biases than clinical testing to the benefit of almost any community.”

Persons with COVID-19 shed the virus in their stool, whether or not they have symptoms. In the summer of 2020, Knight and colleagues leveraged that fact to begin robotic sampling of wastewater on the UC San Diego campus.

“The university’s Return to Learn program was conceived and built on three pillars: viral detection, risk mitigation and intervention,” said UC San Diego Chancellor and study co-author Pradeep K. Khosla. “Nothing like this had been done before. Sampling and detection efforts began modestly, but grew steadily with increased research capacity and experience. Currently, we’re monitoring almost 350 buildings on campus.”

The program has been a success. Students began returning to campus in mid-2020, with COVID-19 case rates far lower than in surrounding communities. In March 2021, wastewater surveillance went regional, with multiple samples sequenced each week from San Diego County’s primary wastewater treatment plant at Point Loma, with a catchment size of 2.3 million people.

“The wastewater program was an essential element of UC San Diego’s response to the COVID pandemic,” said Robert Schooley, MD, professor in the Department of Medicine at UC San Diego School of Medicine, co-lead of the Return to Learn program and a study co-author. “It provided us with real-time intelligence about locations on campus where virus activity was ongoing.

“Wastewater sampling essentially allowed us to ‘swab the noses’ of every person upstream from the collector every day and to use that information to concentrate viral detection efforts at the individual level.”

Central to these efforts was SEARCH (San Diego Epidemiology and Research for COVID Health), which brought together scientists from UC San Diego, Scripps Research and Rady Children’s Hospital-San Diego to develop methods for viral tracking, including improved concentration of viral RNA in wastewater and an algorithm called “Freyja,” described in the published research.

SEARCH scientists, whose efforts also include a variety of clinical-focused projects, can now accurately determine the genetic mixture of SARS-CoV-2 variants present in just two teaspoons of raw sewage and identify new “variants of concern” up to 14 days before traditional clinical testing. The group detected the Omicron variant in wastewater 11 days before it was first reported clinically in San Diego.

“In a lot of places, standard clinical surveillance for new variants of concern is not only slow, but extremely cost-prohibitive,” said Kristian Andersen, Ph.D., professor of immunology and microbiology at Scripps Research and co-senior author with Knight. “But with Freyja, you can take one wastewater sample and basically profile the whole city.”

“The idea is to put everybody on alert that a surge is coming, and act accordingly: Get vaccinated if you’re not vaccinated. Get boosted. Wear a mask. Think twice about attending large indoor gatherings,” said Knight. “It’s a chance to avoid a surge that translates into more patients in hospitals and morgues.”

RNA sequencing from wastewater has two specific benefits: First, it avoids the potential of clinical testing biases, such as limited or non-representative samples, and second, it can track changes in prevalence of SARS-CoV-2 variants over time.

During the study period, researchers collected and analyzed 21,383 wastewater samples: 19,944 samples from the UC San Diego campus and, for comparison, 1,475 samples from the greater San Diego area, including the Point Loma plant, and 17 public schools in four San Diego school districts.

Genomic sequencing of 600 campus wastewater samples was compared to 759 genomes obtained from campus clinical swabs, all processed by the Center for Advanced Laboratory Medicine (CALM) at UC San Diego Health or the EXCITE Laboratory at UC San Diego.

Additionally, the researchers compared 31,149 genomes from clinical genomic surveillance of the greater San Diego community to sequencing of 837 wastewater samples collected from San Diego County (including those from the UC San Diego campus).

“By deploying the rapid and affordable techniques developed at UC San Diego as part of a comprehensive public health intervention, SASEA allayed parent and child anxiety by ‘making the invisible visible.’ And because neighborhood schools serve specific communities, wastewater monitoring with genetic surveillance can give researchers and public health officials the tools to rapidly identify new outbreaks, tailoring their response to meet the community where they are, geographically and culturally.”

Mutational differences between SARS-CoV-2 variants, such as between Delta and Omicron, are often quite small and subtle, though they may result in notable biological changes, such as transmissibility or severity of symptoms. The later Omicron variant proved more transmissible than the Delta variant, and was better able to evade the human immune system and vaccines. However, the average duration of illness was shorter and symptoms less severe with Omicron.

Joshua Levy, Ph.D., a Scripps Research postdoctoral fellow and co-first author with Karthikeyan, developed a library of “barcodes” to identify SARS-CoV-2 variants based on short snippets of RNA unique to each variant. He created a new computational tool that sifts through the mass of genetic information in wastewater to find these barcodes. The resulting program—Freyja—is free and already widely used by public health agencies for wastewater surveillance.

“If you’re in a lab that can already sequence a wastewater sample, you’re good to go,” he said. “You just run this code and in another 20 seconds, you’re done.”

As the pandemic continues, so too does the SEARCH project and wastewater sequencing, evolving like the virus to improve upon existing tools and, perhaps, apply lessons learned to other human pathogens that threaten public health and to other pandemics to come.

“We know that other pathogens, ranging from influenza to monkeypox, can be detected in wastewater”, said Knight. “Working with county, state and national public health organizations to expand this system beyond SARS-CoV-2 will revolutionize our ability to respond not just to this pandemic, but to future ones.”